Why Camp Pike was Located Here

The forerunner to Camp Robinson was known as Camp Pike, named in honor of General Zebulon Montgomery Pike. The camp was awarded to the central Arkansas area due to the efforts of the Little Rock Board of Commerce. The board offered, at no cost to the U.S. government, the purchase and lease of the lands needed to establish the post. Little Rock (Pulaski County) was awarded the camp on June 11, 1917, and the money needed to fulfill the promises was raised from public donations. A total of $325,000 was raised; the equivalent of $5.5 million in 2010 dollars.

United States entered World War I on April 6, 1917. To train the huge number of soldiers that would be required, the Army announced its intention of constructing 32 cantonments across the country. Each cantonment would have a capacity of training between 40,000 and 50,000 soldiers at any one time.

By April 15, 1917 the Little Rock Board of Commerce (the predecessor of today’s Chamber of Commerce) was actively involved in attempting to get a cantonment located in the vicinity of Little Rock. They formed a Military Affairs Committee which met daily at 10:00 a.m. This committee sent the Board of Commerce’s manager, Mr. George Firmin, to the Headquarters of the Southeastern Department in Charleston, South Carolina and from there to Washington, D.C. During these visits he gained valuable information on the conditions that would have to be met for the establishment of a cantonment. 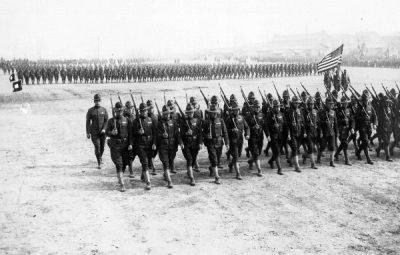 Armed with this information, the Committee began inspecting locations near Little Rock and soon determined that the most suitable location was in an area north of the river. The Committee hired engineers and had a topographical map made of the area showing contours every 10 feet.

About this time the Committee received a lengthy questionnaire from the Southeastern Department. The Committee immediately called together a large number of local citizens and established several working committees to investigate and answer, according to their area of expertise, each of the questions submitted. When this was completed the Committee sent a delegation to Charleston with the completed questionnaire and other data they had prepared, including the topographical map.

The Southeastern Department sent an inspection team to examine and report in detail on the communities that were applicants for cantonments. In the Twelfth divisional area, in addition to Little Rock, these included Fort Smith in Arkansas, Hattiesburg and Holly Springs in Mississippi and Alexandria and Shreveport in Louisiana.

The inspection team raised some serious concerns about the site selected by Little Rock. The primary objections were the presence, during warm months, of the malaria carrying mosquito, the lack of adequate rail service to the proposed site and the lack of an adequate water supply. Not to be deterred, the Military Affairs Committee redoubled its efforts.

The Committee engaged the services of Dr. C.W. Garrison, the state health officer. He prepared a demonstration that showed the mosquito could be completely eliminated for $50,000 and the Committee immediately pledged the money to cover the eradication.

The Committee consulted with the Missouri Pacific Railroad on the lack of rail service. They received positive assurance that Missouri Pacific would, upon the location of the cantonment, immediately begin the construction of a rail line to the site with all necessary side tracks and turnouts. The Railroad guaranteed completion in three weeks.

The Committee then turned its attention to the water supply problem. They engaged the services of expert well men, who concurred with the conclusion that adequate water was not readily available on the site. However, the well men thought adequate water could be obtained from an underground stream in the old river bed in Argenta (now North Little Rock). A test well was sunk and the Committee was able to demonstrate that they could deliver the 2,500,000 gallons a day that was required for the cantonment. 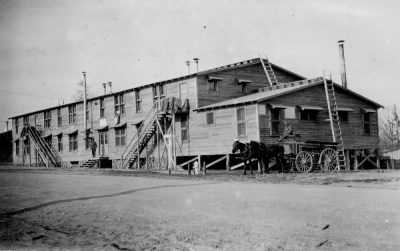 The first troops began to arrive on September 5, 1917. The first man to register was Walter Sherman Sarten, a farmer from Bentonville, Arkansas. By September 8, 1917 there were 1,500 men in camp; that number would grow to as many as 100,000 by the fall of 1918. Construction on the camp was completed in December 1917.

After arriving at the camp all new soldiers were restricted to barracks for a ten-day quarantine to prevent the spread of contagious diseases. After completing the quarantine the soldiers were issued uniforms and began training. The majority of the soldiers stayed in two story wooden structures. Sleeping quarters were on the top floor and consisted of approximately 100 cots arranged in single rows along the two outer walls and down the middle. Each cot had a mattress filled with straw. Located on the first floor were a mess hall and a squad room. All cots and mattress were moved outside each day, weather permitting, and the floors were scrubbed.

The camp had an immediate impact on the economy of central Arkansas. Although no records exist to determine how much of the camp’s supplies were purchased locally, of necessity a large portion would have been procured from sources in central Arkansas. As an indication of the quantities of supplies needed for the camp, in the first three months of the camp’s occupation, the quartermaster ordered: 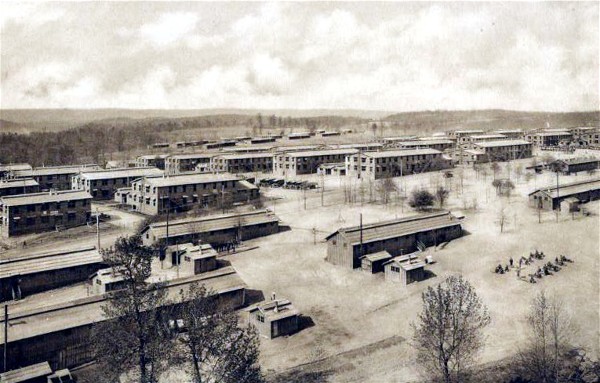 General View of a Part of Camp Pike

Click here to view a video about WWI and Camp Pike.

*Photographs from the National Archives