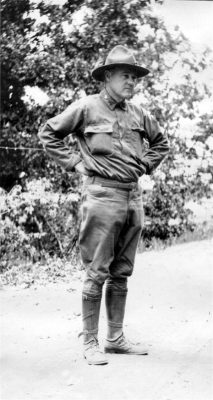 On June 14, 1917 Major John R. Fordyce departed Washington, D.C. with orders to report to Little Rock for duty as the Construction Quartermaster for Camp Pike. Major Fordyce, a Little Rock native, had been commissioned in the Engineer Reserves in April of 1917 and had been called to active duty on May 24, 1917. Reporting to Washington, D.C., he had spent the next several weeks studying the proposed standard cantonment plans.

Immediately on his arrival in Little Rock, Major Fordyce met with the president of the Missouri Pacific Railroad, and within 3 day work had started on the spur to Camp Pike. Realizing that the railroad would take at least three weeks to complete, Major Fordyce constructed a road from the end of the existing railroad to the nearest highway. This one-quarter mile road was put to heavy use until the rail spur was completed on July 15, 1917.
Photograph from the AR NG Museum archives

While Major Fordyce was busy getting things started, unknown to him others were trying to get things stopped. In a newspaper article written after the war, Fordyce wrote ” I had been on the ground for 10 days, and had sent in all these reports and had gotten up a topographical plan which showed that a splendid camp could be laid out on the ground which the Little Rock citizens had given up to the government. In spite of this, no contractor had been designated to do the work and it began to look as though the plans would fall through. While on duty in Washington, I had seen three or four large cantonment plans for various places which had been sent in to the construction division for consideration, rejected, and the camp locations changed to other places. I began to be fearful that this was going to be the fate of the camp near Little Rock. The plans which I had sent in had been rejected and returned. I had received rush telegrams asking more details about the health conditions and numerous other points on which there seemed doubt. There seemed to be an undercurrent of opposition to all our plans, and the situation appeared so serious that the local committees were just preparing to send another delegation on to Washington to try to find out what was holding up the project and why no contractor had been assigned to begin building the camp. It developed that a number of army officers stationed at Fort Logan H. Roots had made a most adverse report about the location of the camp near Little Rock, and this report had been sent to General Wood, then in command of the Department of the Southeast, at Charleston. When this report was received, General Wood, instead of concurring with the recommendation and sending the report on to Washington, came himself to examine conditions, and after a most thorough and exhaustive investigation into the plan, wired the adjutant general his full approval. After that the contractor was immediately appointed and I was given every facility with which to rush the work. So I feel that but for General Wood and his approval Little Rock would have lost the camp.”

The initial construction contract was given to James Stewart and Company of St. Louis and New York and work began immediately in accordance with plans prepared by Black and Veatch, Architects-Engineers of Kansas City, Missouri . The contract was for the completion of 1,100 buildings within 90 days. During the rest of the summer a work force of between 5,000 and 10,000 worked feverishly to complete the buildings and utilities. The weekly payroll exceeded $300,000 a week. In addition to local workers, about 1,500 workers were imported from Puerto Rico and about 3,000 from Texas and Oklahoma to assist in the war construction around Little Rock. The project was receiving between 80 to 100 railcars of lumber a day; about 1,000,000 board feet of lumber received and put up each day.